Summary of the Year Zero for New gTLDs

Summary of the Year Zero for New gTLDs 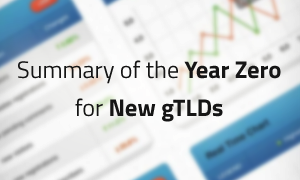 The recent report offered by the French domain registry recaps the results of dynamic changes characteristic to last year's activities on the domain market. The prediction for 2015 draws an optimistic picture of 8 million new domain registrations within new gTLDs.

By the end of 2014, there have been more than 760 TLDs in the root in total, which demonstrates an increase of 89% when compared to 2013. In comparison with 2012, the has been a rise of 147% which can mainly be attributed to the release of new gTLDs.

The above figures clearly demonstrate that the domain name system has undergone some dynamic changes within a period of a few months, more than during the first twenty years since its establishment. While most existing new gTLDs were released in 2014, the trend is ongoing. ICANN is still working on processing new domains and it appears that this development will extend into 2015 and 2016. Future projections offer the number of new TLDs entering the Internet by the end of 2016 as around 1,350. 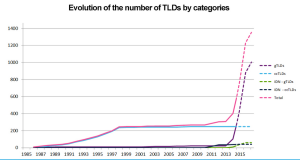 At the same time, the rapid growth of the number of extensions does not represent equally intense interest in the nTLDs from both domain businesses and net users. Based on ICANN’s October report, 72 % of domains launched before that month reported less than 5 thousand registered domain names, and only less than 1 % of new gTLDs had over 100 thousand registrations, which in some cases came about as the result of aggressive marketing schemes.

An example of such marketing policy may be the campaign organised by the registry of .xyz domain that granted new domain names under their managed extension to unaware subscribers. Consequently, at the end of 2014, the .xyz operator had more than 760 thousand domains that constituted 21 % of all their registrations on 31 December.

The renewal rate after the first year of the domain life cycle will show whether the logic behind garnering recognition through high volumes will hold true. There are certainly other crucial factors that may determine the success of a domain.

Domain name give-aways may be interpreted by some as depreciating the value of the domain. Certainly, applicants willing to pay substantial sums for a single domain at auctions must be aware of the domain’s wealth-creating and investment value. The winning companies that compete at auctions for the management of a domain must consider bearing costs of millions of dollars. In 2014, ICANN’s auctioning of 10 domains generated over $35 million. Private auctions produced even greater amounts.

True success of a domain can be appreciated over time; large volumes of sales may not suffice in the long run. The utilisation rate and maintaining the vitality of the domain are just as important, according to the report. Temporary promotions will not guarantee the high turnover rate at the renewal time.

The forecasts of new TLD market growth in 2015 suggest a rather optimistic view with the estimated number of registered domain names by the end of 2015 as over 8 million. Predictions suggest that the number of registered nTLDs of nearly 4.5 million will double by the end of the year. That does not translate into the dramatic change in the dynamic or interest in the new extensions in general. 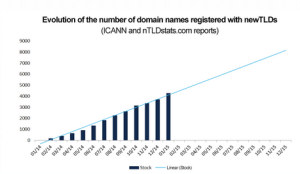 The trajectory above is fairly clear. At present, new gTLDs constitute 1.3% of the market share. While the number of new domains introduced to the Internet is increasing, the resistance of legacy extension .com and country code TLDs is quite strong.

A wide array of marketing models and approaches implemented by operators of nTLDs does not allow to classify the new domains as a homogeneous entity. The coming months will unfold which models have proved most efficient in establishing a lasting presence.