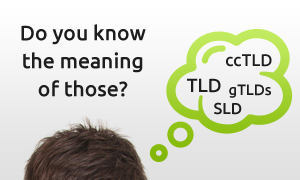 The complex terminology often used in the domain industry may be confusing to some. A lot of Internet users may appreciate clarification of some common abbreviations and terms related to domain business.

When encountering domain business for the first time, people often seek professional advice sites, read blogs and check out forums. However, the content they find is not always easy understand because the terminology used to describe certain phenomena and mechanisms is difficult to comprehend. Acronyms are among the terms that often appear on domain services sites referring to the various types of domains.

Here is explanation of some frequently used domain-related acronyms:

TLD – Top Level Domain. It is the element of the domain name that concludes the web address and is separated from the the next level by a dot to the left. For instance, in the domain .com.uk the top-level domain is .uk.

SLD – Second Level Domain. This is the element preceding the suffix of the TLD, also called sub-domain (in relation to the TLD). In the domain .com.uk the second-level domain is .com. However, in the address europeid.com, the second-level domain is “europeid”. In the second example, the SLD can also be considered as a domain name – because it serves a completely different function than the two-part extension in the first example.

gTLDs – Generic Top Level Domains. The term refers to generic domains consisting of three or more letters. They usually relate to a specific area of expertise. Most gTLDs are time-tested generic domains that have been around for a while, such as .com, .net or .info. However, since the introduction of over 500 new generic domains in 2014, the number of generic domains has been growing and is expected to exceed 1 800 in all.

ccTLDs – Country Code Top Level Domains. The term stands for national domains consisting of two letters. This kind of suffix refers to a state/country, or an independent territory. An example of a ccTLD is the .fr or .no extension. Currently, nearly 300 ccTLDs are in use on the web including tens of IDNs (suffixes containing national characters not based on the Latin alphabet). The .eu domain designated for the European Union is classified as a ccTLD along with the still active .su domain, established in 1990 and referring to the countries of the former Soviet Union.

geoTLD – geographic Top Level Domain. It refers to a domain related to the city, region or other geographical area, but is not synonymous with the country code domain (ccTLD). The popularity of geographical TLDs has risen thanks to the new gTLD program, that helped launch such domains as .london or .berlin. What is more, .asia established in 2007 is also considered as a geo TLD.

sTLD – sponsored Top Level Domain. Sponsored domains are formed to designate a specific industry or institution and are financed by the interested client. STLDs have been actively operated on the web for many years, but only few of them are considerably recognizable. Some of sTLDs include .edu, sponsored by Educause, or .gov, sponsored by the US government.

nTLD – new Top Level Domain. This is a collective name for all new domains generated within the new gTLD program initiated in 2013. This category comprises new domains such as gTLDs, geoTLDs or ccTLDs with non-Latin characters.

GccTLD – for Generic Top Level Country Code Domain. It is also called a generic national domain. This combination may seem paradoxical, since the functions of national and generic domains seem to exclude each other. However, some national domains are not very attractive as country codes but appear to have an appeal on global domain market. Some of gccTLDs, like .me or .ly, are well suited for forming domainhacks, or to become a meaningful element of the domain name, for instance notify.me. Furthermore, some ccTLDs such as .co can be decoded as an abbreviation or an acronym. An example of such use can be the .co domain which can easily be read as an abbreviation of .com, referring to commerce.

IDN – Internationalized Domain Name. IDN is a domain which comprises national characters. It contains Unicode characters that translate into ASCII through the use of Punycode algorithm and become visible to the DNS (Domain Name System). IDNs flourished on the Internet as a result of the nTLD program that supported the creation of domain names in various languages, including Arabic, Chinese and Russian. The acronym also means a domain name that consists of at least one accented character, for example À, ç, ƀ, etc.

Registration of .TR domains via our website system is currently unavailable.